As the picture above suggest, I’m currently in love with macarons. I was first introduced to them like last year, when my mum bought a box of them from Canele. Didn’t really like them then cause Canele’s macarons were overly sweet! I felt like I was eating chewy icing. Their fillings were too buttery too, almost like the buttercream had separated. So nah-uh. Never again.

Then I stumbled upon pictures and pictures of macarons on others’ blogs and ohmygod did they look heavenly or did they look heavenly. Thus my interest in macarons were revived! Haha about a month back I went for this United Nations Singapore Annual Conference. We ended early, so my friend and I decided to go walk walk and makan makan! Jewels Artisan Chocolate was on my to-try list, so since we were in town, I was like let’s go! 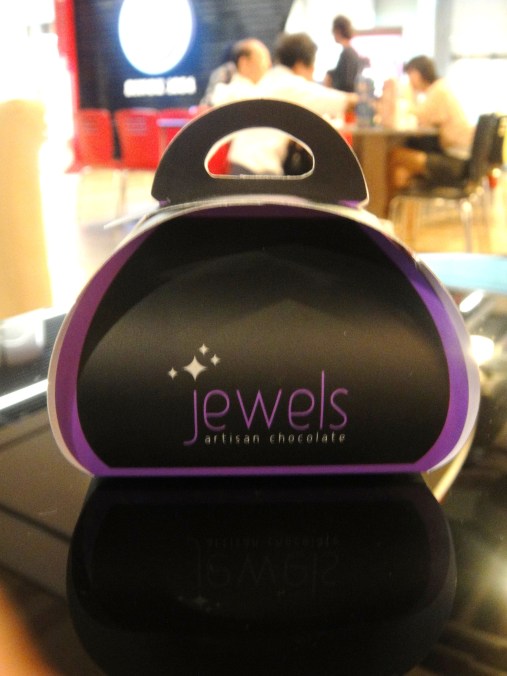 Oh the loves~ the Green Tea was the first to go cause I’m a matcha addict. I loved that the green tea flavour was really pronounced and intense cause many places just scam their way through with sickly sweet fillings. I didn’t really appreciate the chocolate pearls though. I felt that the texture was overpowering and its inherent sweetness masked the matcha flavour that I so adore. Simply Dark was a direct hit, and is probably the best chocolate macaron I’ve had thus far, in par with that of Obolo’s. The Brun was just BOOMZ. It was a plain sugar rush after the dark chocolate, with a distinct hazelnut taste.

After eating this, it became a must to visit Jean-Philippe Darcis at Marina Bay Sands. I was planning to go there anyway cause I had to collect my free National Day funpack xD

I had the Raspberry, Pistachio and Almond Milk. Compared to Jewels’ macarons, these were different. Good different. Darcis’ shells have a rather crunchy outer layer, but a real meaty inner layer. I was pretty impressed with their Pistachio cause the ones I tried previously at Obolo, Canele and Bakerzin were disappointing. Darcis’ actually had a nutty taste to it which I really appreciated! Their Raspberry was really refreshing cause it had a rather jam-like filling as compared to the creamier fillings of the other two. It had a really fruity taste. I felt like I was eating jam on a chewy biscuit LOL! 😀 the almond milk was surprisingly different, with a filling more towards a whipped-cream kinda consistency. I hate whipped cream, so for me to like this is really something! On the overall, I was reeeeeeeeally impressed!

Jewels and Darcis are now my top places to go to for macarons, in addition to Obolo! (: