“I like the look of a galette better than a picture-perfect traditional tart,” says author David Lebovitz.

What is a galette?

A more detailed definition goes like this: “More often than not, despite the fact that it can refer to a number of different baked goods, the term galette typically refers to a free form tart that is made with a flaky pasty crust. These tarts are not molded in tart pans. Instead, filling is placed directly on top of a sheet of rolled out pastry and the edges of that pastry are folded up and around the filling. The tart becomes crisp during baking and the dessert, as a whole, manages to be both rustic and elegant at the same time.”

Of course most of you foodies out there would probably know what a galette is. Sadly most Singaporeans are still not very informed about such French sweets and pastries – or in fact any sweets and pastries at all – so when I told my friends and family “Hey I wana bake a galette!” they all gave me the “”whuuuuuuuuut?” look. Then after I baked it, they all said “ain’t that a pie?”

Seriously. Even tart would be closer but no, PIE.

Took me a whole half an hour to convince them it’s not actually a pie, but a galette. Sigh…

This post is supposed to be about my first baking date that took place last week actually. So it’ll be a break from posting about all my past escapades and a peek into what I’ve been doing recently! What happened was a few of my friends came over that day to bake! Like yay my very first baking date!! I was sososo excited! We decided to make a cupcake and some cookies. Then at the very last minute I threw in the galette. Blame it on foodgawker for tempting me with those mouth-watering galettes and tarts. I took in onto myself to look for the recipes, so that I can tweak them a tad here and there to make them less sinful. Relatively. So what I finally decided on was Miette’s Double Chocolate (cup)Cake filled with peanut butter mousse and an apple frangipane galette. The cookies were entirely my friend’s cause he said he wanted to make us his Famous Amos-equivalent cookies 😀

For the cupcakes, I stuck pretty close to the recipe cause I didn’t want a baking failure with my friends around! The only thing I did was to reduce the amount of sugar called for, and my friend suggested to reduce the amount of oil present too. I guess he was pretty freaked by the 1/4 cup of oil required! The batter was slightly watery though so I was a tad worried when we sent it into the oven. But heyheyhey, it turned out pretty darned good!! The taste was spot on. The texture was moist, and just a tad dense. Kinda like a soft and really moist hot brownie, but still uber decadent!

We scooped the middle up, and filled it with some peanut butter mousse, and presto!! Delicious cupcakes coming right up! We each had one on the spot, then I refrigerated the rest and finished them within the week. Cold, they were even more like brownies! Real chewy and fudgy, just the way I like them (:

What’s most surprising though, weren’t the cupcakes, but the mousse. I have problems whipping egg whites and cream, which is really annoying cause so many wonderfully delicious recipes call for either/both of them. I’ve a feeling it’s got to do with my beater or something, but I can never get everything to be whipped properly. The top could be beaten to stiff peaks, even to the point of separating, but everything else below that surface would be watery and totally un-whipped. I don’t know what went wrong but I can never get that done properly 😦 so making mousse became a tad hard for me. This mousse, however, was foolproof. And it was drop-dead gorgeous. Sorry I have no better word to describe this mousse but it was ohhohohoho oh-so-gooooood.

When I was making the mousse, everyone was like “urgh that’s not gona work!!!” But one mouth of it, and they were sold. My sister, who absolutely dislikes mousse, and who thought that peanut butter mousse sounded like a monstrous idea, had a mouth of it, took another, then finished all my remaining mousse. A whole bowl of it. So yeah trust me, this mousse is DEFINITELY worth making. And the secret ingredient is…hohoho tofu. Yes tofu. 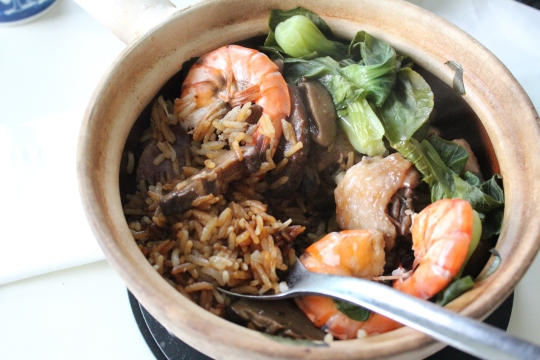 Claypot rice for dinner! Cooked by my awesome mum!

I don’t have the recipe for the cookies for you guys, but I’m going to bug my friend for it cause really, the cookies were Famous Amos worthy. He studied Food and Nutrition, so his cookies are not based on any particular recipe, but follow the standard fat-flour dry-wet proportions. I was honestly surprised they turned out so good!! And ohmy they were really addictive. I had about 10 of them after the cooled omg.

Probably the only thing that went wrong was that he added too much butter. So while baking the cookies couldn’t hold their shape. He didn’t space the batter out enough either, so we ended up with a real big rectangle of cookie. Yep one cookie.

We had to wait for it to cool before cutting it up with a spoon! 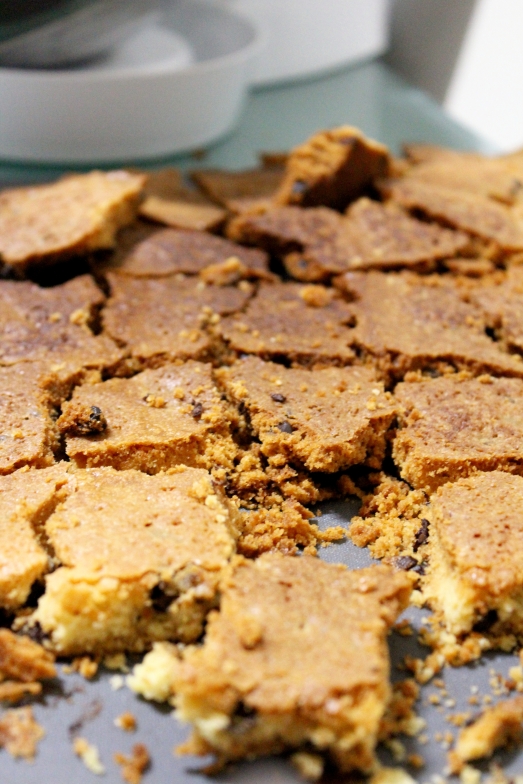 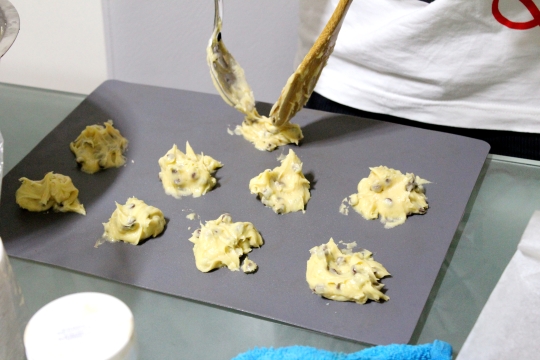 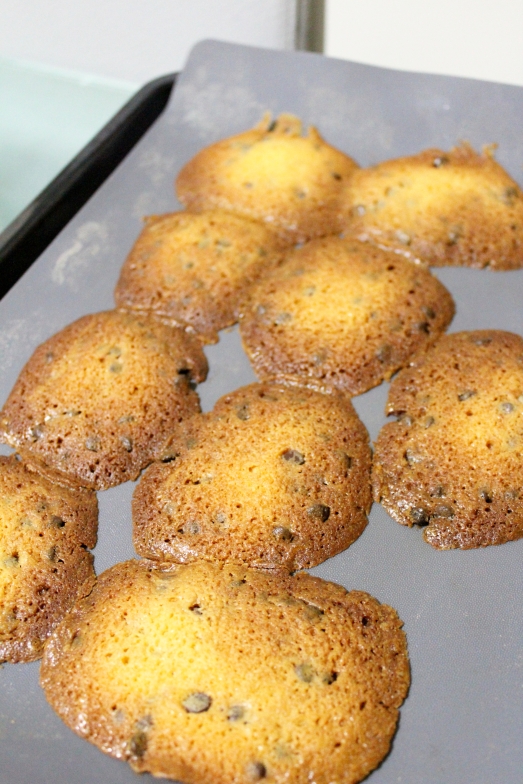 Oh well it’s still edible anyway!! And now it’s got this really rustic look that I thought was rather cool. 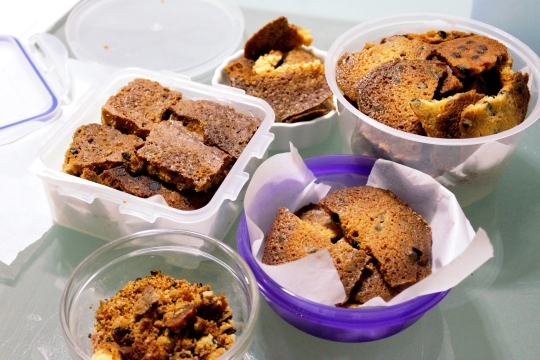 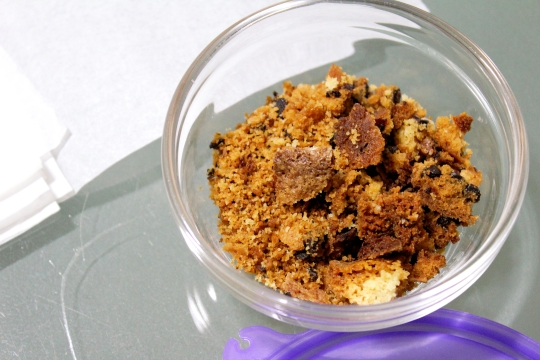 We ended up having lots of cookies to munch on!!! And I kept these scraps as ice cream toppings (:

While my friend was mixing up the cookie dough, I was preparing my galette. The recipe was really straightforward and simple so I was really happy with that. The only problem was, I’ve never baked a galette before. So I didn’t know how much space I should leave between the fillings and the border of the tart, neither did I know how to pleat the dough properly. The pleat ended up being too small and opened up while it was baking. The frangipane started flowing out, and I got a pretty ugly looking galette.

But don’t let that put you off cause taste-wise this galette nailed it. Like totally. My parents called it the best apple tart I’ve ever ever ever made! My mum even asked me to make another! Coming from my mum who doesn’t really eat sweets and pastries, that’s a real compliment (:

2. Sift together the flour, cocoa powder, baking soda, baking powder, and salt into a bowl and set aside.

3. Put the chocolate in a heatproof bowl and pour the boiling water over it. Whisk until the chocolate is melted. Let the mixture cool for 15 minutes.

4. In a separate bowl, whisk together the buttermilk and vanilla. Set aside.

6. Reduce the speed to low and slowly pour the cooled chocolate mixture into the egg mixture. Slowly pour in the buttermilk and vanilla mixture. Add the sugar and whisk until the batter is smooth and liquid, about 2 minutes.

7. Stop the mixer. Remove the bowl and add the sifted dry ingredients and fold it in until just incorporated. Using a rubber spatula, scrape down the sides of the bowl and mix again just briefly by hand. The batter may still look a little lumpy, but stop mixing.

8. Pour the batter through a medium-mesh sieve into a large measuring cup or bowl to remove any lumps. Press against the solids in the sieve with a rubber spatula to push through as much batter as possible, then discard the lumps. Divide the batter between the prepared pans. Bake until the tops spring back when lightly pressed and a tester inserted in the centers comes out clean, about 45 minutes.

9. Transfer to wire racks and let cool in the pans for about 20 minutes. When the cakes are cooled enough to handle the pans but still a tad warm to the touch, carefully run an offset spatula around the edges of the pans to loosen them, then invert the cakes onto the racks and remove the pans. Let cool for about 20 minutes longer. Wrap the cakes tightly in plastic wrap and refrigerate to ensure that the interiors are completely cooled before decorating, at least 1 hour or for up to 3 days. To freeze, wrap tightly in a second layer of plastic and store in the freezer up to 2 months.

For the crust:
1. Combine the flours and salt.

2. Using a fork/wooden spoon/processor, mix the cold cubed butter into the flours till the mixture resembles breadcrumbs. Then add in the water a tablespoon at a time till the dough comes together and forms a ball. The dough Should stick together but not be wet.

3. Roll it into a ball, wrap it with some cling wrap, flatten it into a dish and refrigerate for at least 1 hour. After the dough has been shaped, let it chill for a further 20 minutes before baking.

For the frangipane:
1. Cream the butter and sugar till it is pale, light and fluffy. Add in the egg and mix. Then sift in the dry ingredients and add in the rum if using. Mix till everything is combined.