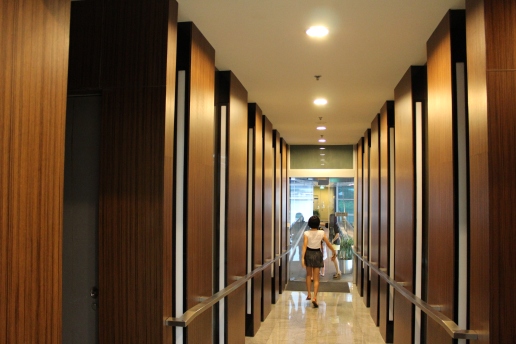 “This had to be posted while it was still fresh in my mind. Cause I might be nuts by the end of this month!”

That was what I wrote two weeks back before the start of my papers. I soon realised that it was tooooo long a post to be finished then. And since I’ve some 4 days before my next paper, me shall chillax and spend the rest of today clearing up my deck of wp drafts! Btw they’re all just titled. Which means I’ve got LOTS to do.

So anyway, since my birthday falls during the As, or more specifically the day before my last paper, I requested to have a super duper early celebration! Which was kinda sad cause I’m not in the birthday mood yet, and I definitely did not feel birthday-girl-ish.

Still my parents were really lovely to agree and book a table at Forlino the previous night. I suggested iL Lido, Forlino or Ristorante Oso and let my mum make the final decision so it’ll be a third of a surprise! Haha these three restaurants stuck out to me because I’ve been there only once, and they’ve recently revamped their menu/changed chefs. iL Lido was a total disappointment the last time we visited – about 4 months back – while Forlino was just plain uck. We ate at Forlino when it just opened (HAH before Xiaxue’s wedding!) cause we heard from iL Lido that it was its sister branch. Sadly it did not live up to expectations. So this time I was hoping for something much better, especially after all the rave reviews and awards it received.

The one thing imprinted into my memory was the absolutely stunning ambience. The entrance is through a seemingly unimpressive door frame, which once you step pass reveals two flights of stairs encased in glossy darkness. Gleaming tiles that echo with every contact of your heels (if you are a lady, I hope) will gradually shift into checkered patterns that are in stark contrast to the Victorian-ish walls. It’s like stepping into Alice’s Wonderland. 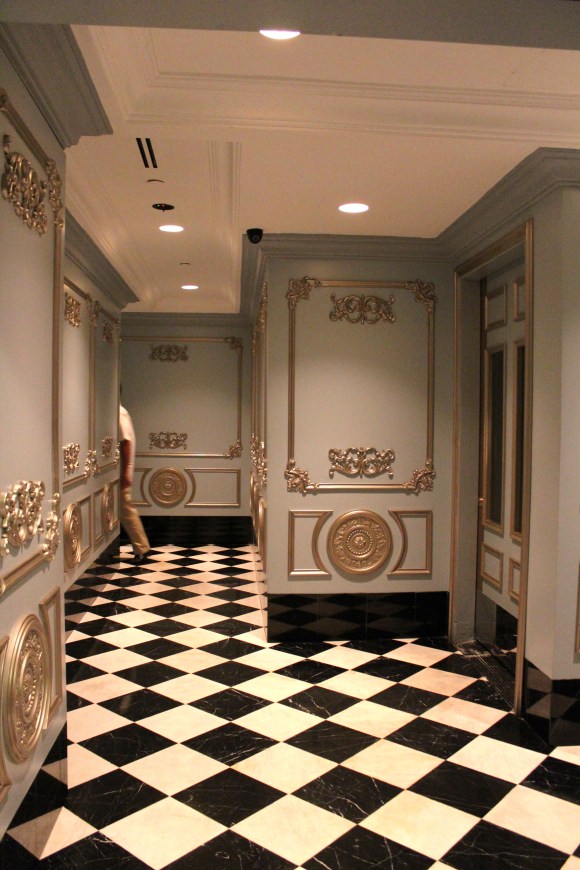 Absolutely stunning if I may say. 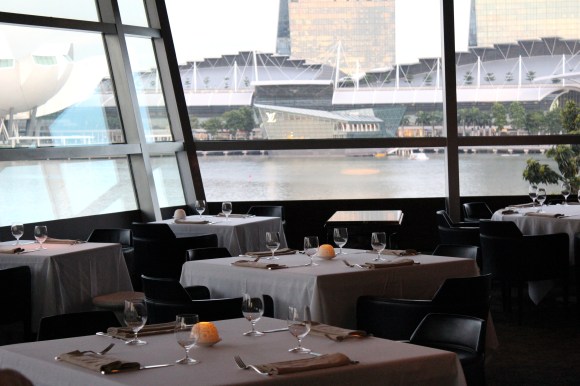 Still-empty restaurant with an amazing bay view. We always secure the earliest bookings (:

I could type a gazillion words just describing the enthralling ambience, and probably write a haiku or two. But I guess you’d rather not so let’s get to the point. FOOD:

I’ve always had a fascination with amuse bouches. They just look so interestingly small and decadent, so minimalist I feel I could eat a dozen of them! This amuse bouche rather intrigued me because it looked like a choux pastry to me. Then the lady introduced it as Parmesan Mousse. Dang. It had a crusty exterior that gave in to a creamy yet light tasting interior. It didn’t strike me as mousse-ish. Rather it was entirely like a choux, with cheese as a replacement for vanilla in the cream patissiere. Still it was pleasant and did pique my interest for what was to come!

We were then served these individual plates of focaccias. Warm and fluffy, these were absolutely lovely. Definitely. I felt that those I ate on my first visit was a tad nicer though cause either the butter was salted, or the surface of the bread was salted. This round it was nice, but just a tad bland. Olive oil and vinegar set it right in no time! 😀

As usual, I was the one who ordered the appetizers! Haha I didn’t ordered what I thought was the nicest though, cause $42 for a Lobster salad was too steep. In the end we had the Burrata Cheese with Parma Ham and Braised Leeks and the Artichoke Salad with Aged Balsamic Vinegar to share, and my parents had the foie gras.

My parents absolutely adored this dish, and shockingly so did the twins!! They were requesting bites after bites, which kinda freak me out. The description itself already sounds like an interesting blend of flavours!

The zuppa, on the other hand, was a total miss. I was delighted that it did not taste overtly creamy, thus allowing the mushrooms to shine. However the stock that they made it in was definitely lacking in flavour, because this soup was underseasoned and did not have that unami flavour supposedly present in mushrooms.

Great balsamic, nice parmesan slices, fresh greens. Yep that’s pretty much all I have to say about this dish. The artichokes were boiled I believe, because they were soft and pretty soggy. Totally tasteless. Hmmm…and I sooooo did not appreciate the fact that the reduced balsamic practically glued itself to the plate. I had to scrub it with the greens before it would grudgingly coat the veges.

My burrata lies over the ocean, my burrata lies over the sea~ I’m not sure I’m making any sense, but this was pure bliss. A pig after my own heart. Forlino certainly did this dish much better than Pietrasanta, which I visited the previous week. They were so generous with the parma ham…lovely, or else we’d die trying to eat that entire ball of burrata cheese!

Tomatoes, lobster, al dente pasta, nuff said. Epic delicious. This was probably the best dish we’ve had that night! The tomatoes were sweet and juicy, the tomato sauce was slightly creamy (but not overly so cause I hate cream-based sauces), and the lobster was just so sweet. Yums.

The Twins shared this for their main. Fresh seafood…fresh tomatoes? Haha it was pretty decent, but just meh. Not uber impressive.

Soft and moist, this delicate dish was well executed. And from what I know, cooking such a thin slice of pork ain’t all that simple cause it’s so easy to overcook it! This was perfect 😀

An entirely meh dish. There was barely any hint of truffle in the sauce, and I don’t taste any goose liver. At all. Which is good since I hate it, but which means they missed the entire point. The quail was well done though.

Seeing that it’s the truffle season, my dad got some truffles on his dish! $45 for a few grams. Ouch.

I don’t see what’s so special about truffles! Ok I get that there’s this weird flavour in truffle oil that some people (more like many) seem to love, but these authentic shaved truffles tasted so bland, I felt that I was eating radish or something! Radish with the texture or cheese. That’s what it was like.

I had this, and I enjoyed it (: the mash was chunky and had a strong rosemary taste. Chunky’s great by me cause smooth creamy mash can sometimes become too boring and a tad jelak. The broccoli was boring though. Plainly boiled and totally under-seasoned. Probably even NOT seasoned. I would have loved this dish if the balsamic vinegar was actually present in the dish. What I got was this pathetic brush-stroke of vinegar that seemed more like a plating deco-thing than an actual condiment. I had to use the broccoli to scrub and scrap at that measly stroke of balsamic in order to get it off the plate, and to flavour my boring ol’ broccoli. Whoever said eating raw broccoli was great is nuts.

Fish: great sear on it, moist and crumbly on the inside. Basil sauce: slightly under-seasoned. Risotto: me no likey. I don’t know but risotto tastes best to me when it’s made with rice, not any other kinds of wheat like spelt, which tasted entirely like barley! Luckily this wasn’t my main, but the Twins’ SECOND main. Yup, kids and their ginormous appetites. Did I mention I love halibut??

Since it was my birthday, my mum made this special arrangement with the restaurant! So I get a surprise cake! Yay me! ❤ you know usually you’d cut your cake after you blow the candles, so I was a little astonished when they took the dish away before letting me cut it. I asked them to “WAIT! I wana cut my cake!” And the lady actually blushed when she told me that it was a fake. A dummy cake. PFFT. Apparently they have this dummy that they put for show all the time, and the real cake’s sliced and hidden in the kitchen. No fair. 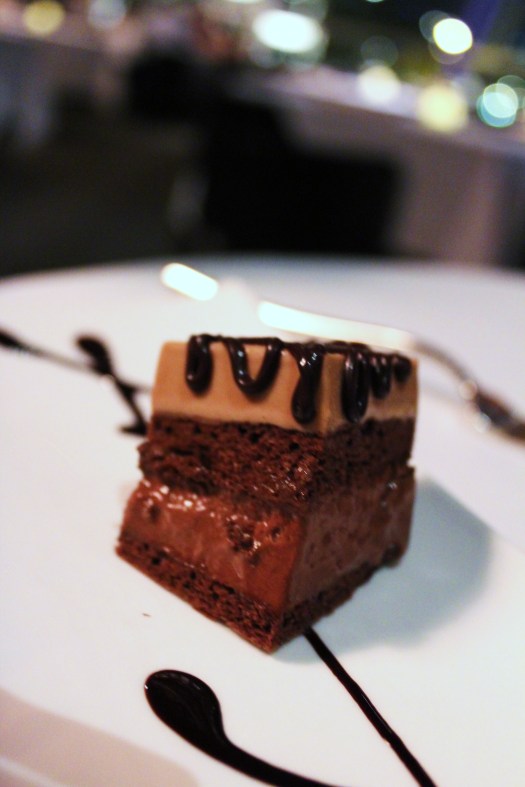 THIS, is what the REAL cake looks like. Bad photo I know! >< 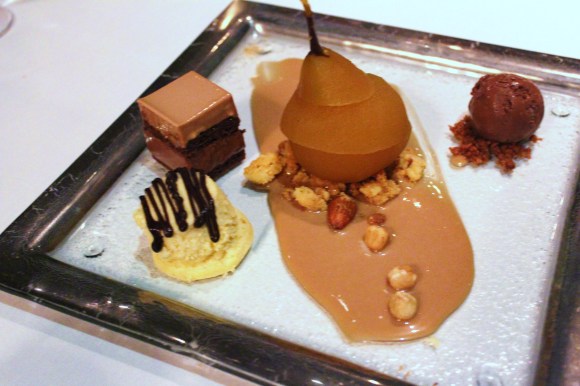 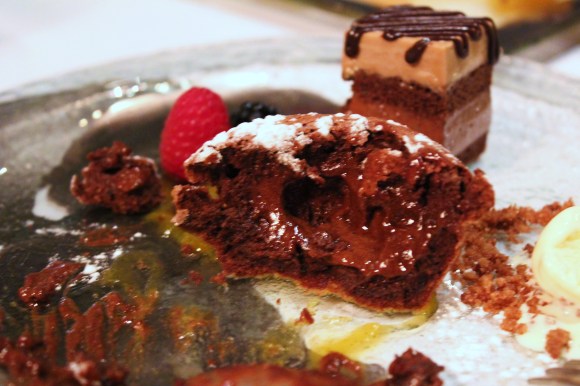 The Naked Apple Cake with Moscato Wine Zabaione was bad. It was just baked apple. It tasted like the apple sauce that I made, just before I squashed the baked apple. And the zabaione tasted extremely eggy! I think I even saw some solid egg bits in there! Tsk tsk they need to get a strainer~ It was not impressive at all. Ok it was bad. I liked the Poached Pear with ‘Gianduja’ Chocolate & Hazelnut Sauce though! I was reeeeeally happy when I saw it on the menu cause I’ve NEVER seen poached pears on dessert menus! Even though it was supposed to be this typical italian dessert. My dad couldn’t understand my fascination with it. He was like “WHY?! IT’S JUST A PEAR. Why am I paying money to eat a pear that’s barely been meddled with?” Hmmm O.O Molten Lava Chocolate Cake, Mascarpone Icecream and Persimmon Coulis was average. The taste was there, but as usual I was super perturbed that the chocolate did not flow out of the cake! To me that’s a MUST in molten lava cakes. I thought that the persimmon coulis and the icecream stole the show, and that tells a lot about the standard of the dessert. Meh!

This was…a replacement for petite fours? I’d rather they didn’t serve this, cause it ended my meal on a bad note. It felt like fried pappardelle with lotsa icing sugar on it. Tasteless (discounting the icing sugar), hard, and just flour-y.

I guess my second visit to Forlino didn’t improve my impression of it by much. Yes, the dishes are marginally better as compared to my first visit, with dishes like Spaghetti ‘alla Chitarra’ with Lobster being unexpectedly outstanding. I don’t think I’ll be back there anytime soon. Or even at all. Unless it’s to see that extremely hot and cute waiter OH HOHO! 😀