June’s sorta like a celebratory month for our family because there’re three birthdays to celebrate! My twins’ – as I have previously mentioned – and my aunty’s! To be more accurate, she’s our family’s domestic helper. But she’s been with us for nearly 10 years, so she’s kinda like family now. I just call her aunty (: since I’ve started baking this year, I’ve decided to bake a cake for every special occasion! So I chose to bake two cheesecakes this month.

For my dear aunty, I wanted to bake a Matcha no-bake Cheesecake. That’s cause she can’t take eggs. I thought it would be relatively easy to make, seeing as to how I successfully made two no-bake cakes. But oh no, anything that includes heavy cream/whipping cream has proven to be too much for me to handle. For now at least. It came out…not right. The taste was definitely there, but it was super wobbly even after being in the fridge for around 7 hours. Really wobbly and un-firm. When I removed the mold, it started to flatten -.- really disappointing 😦

Look at those cracks 😦 sigh…at least the strawberries were fresh LOL. 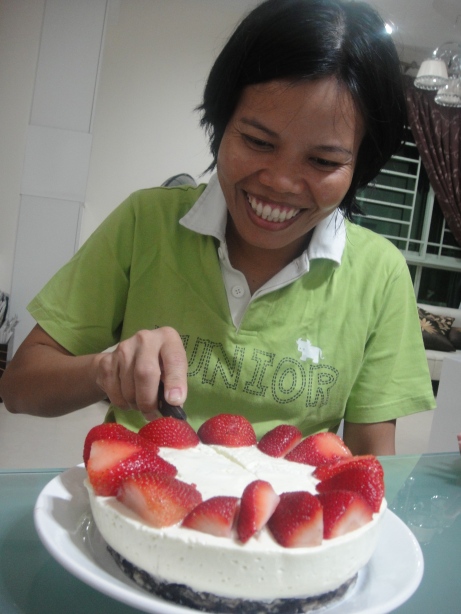 But like I always said, seeing her smile is more than enough to make my day. Glad she ‘enjoyed’ the cake! Haha actually the best moment is seeing her expression when she realised I made a cake for her. And a no-bake one too! Cause sadly, I always forgot she can’t take eggs >.<
So that was my failed cheesecake for the month! I knew I was going to make another for my twins, so I was quite apprehensive about it. But you’d never know till you tried! For theirs, I attempted a Nutella Chocolate Baked Cheesecake. Ooh~ sounds hard. To me that is. I was uber careful while measuring the ingredients for fear that I would get them wrong. And to my utter relief, I got it right this time round! I know because I made extra batter so that I could try it first. Had to be sure that my darling sisters’ cake would be good!

Tadah! That was how it looked like it in the end? Didn’t have a really good photo of it sadly…was rushing out of the house and didn’t get to capture a proper photo. Topped the cake with some chocolate ganache and ferrero rochers. I was a little worried initially. This cheesecake had to be baked in a water bath, and the only removable base cake mold I owned then was this cheap one from Daiso. I followed other bakers’ advice to seal the mold with a layer of aluminium on the outside. But water got in from the top!!! 😦 halfway through the baking time, the mold tilted sideways and water got in from the top…that made me super duper worried that the cake would be bad. Luckily it turned out fine. Better than fine!
I was really glad that the chocolate ganache worked out too. I tried making that a few days ago, and I ended up with some crap where the chocolate was burnt, and had separated from the heavy cream to form burnt chocolate, and oil. Urgh. Real horrid. So happy that this passed!

Hehe that’s me sneaking in a photo while they’re making their wishes! 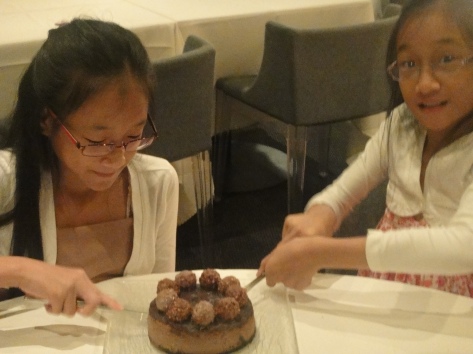 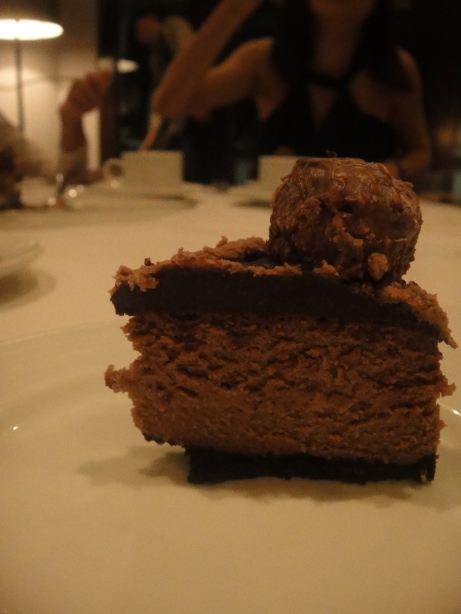 Ain’t looking all that bad yeah? (: shall give cheesecakes more attempts in the future! I’m determined to try all (almost) the recipes in the cheesecake cookbook that I bought a month ago! The next’s hazelnut 😀